The Bank of England released a Monetary Policy Summary on Thursday, 17th December 2020. The report highlighted concerns the central bank has regarding economic implications which remain challenging and hard to estimate. The Bank of England interest rate was held at 0.10%, and the BoE said they will not be able to tighten their monetary policy until economic conditions improve, which includes the inflation rate that remains under the central bank’s target.

The BoE has also left its stimulus mandate regarding bond purchasing unchanged. The BoE said the labor market remains difficult to interpret and hard to estimate because coronavirus implications continue to produce murky statistics in the short term. The BoE highlighted that recent closures due to the pandemic will have an effect on future economic data, and holds out hope that a vaccine will help improve outlook.

Within one important paragraph, the United Kingdom Monetary Policy Summary stated that the coronavirus and its effects on the economy and the transition to a new trade agreement between the UK with the European Union are creating uncertain implications regarding outlook. The fragile underbelly of the UK economy, which is a product of the onslaught of the coronavirus pandemic, is certainly problematic.

Unemployment statistics are troubling for the Bank of England at this juncture because of the endless uncertainty which shadows the amount of workable hours’ data. Employees are being made redundant on a moment’s notice because of on again, off again closures due to coronavirus. The Bank of England referred to the Labor Force Survey with the jobless rate as 4.7% percent, but admitted the numbers remain difficult to interpret. 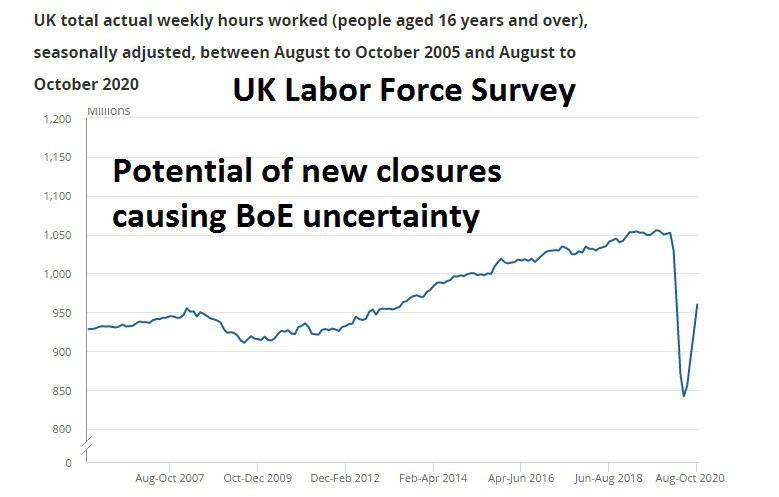 The impact on the UK economy because of a lack of confidence in the public via their job security is a concern for the Bank of England. The revolving door of closures on the working public keeps the employment situation fragile and the statistics difficult to decipher short term as workable hours for a large segment of the UK population remain a rollercoaster-like ride.

New developments in the UK regarding what has been called a new variation of the coronavirus in a mutated form should be monitored too, because its implications in the coming weeks and months could prove significant. Prime Minister Boris Johnson, in his latest announcement concerning new closures, said it was not what the public wants, but what is unfortunately needed as the holiday season approaches.

The Bank of England also needs to take into consideration the potential scope of Brexit ramifications and prepare for two different scenarios, one in which a tranquil Brexit takes place with a new trade agreement agreed upon with the European Union. Or the second option, which produces no deal and a hard Brexit.

The current UK government led by Boris Johnson was elected with a mandate to deliver a Brexit solution. However, the public might be brutally disappointed if the Brexit talks do not produce a resolute agreement before the existing deadline expires and it could be bad news for corporations and financial institutions. The smell from a hard Brexit could be worse than the problematic fishing rights issues, which seem to be one of the main obstacles still causing a disagreement between the UK and EU. 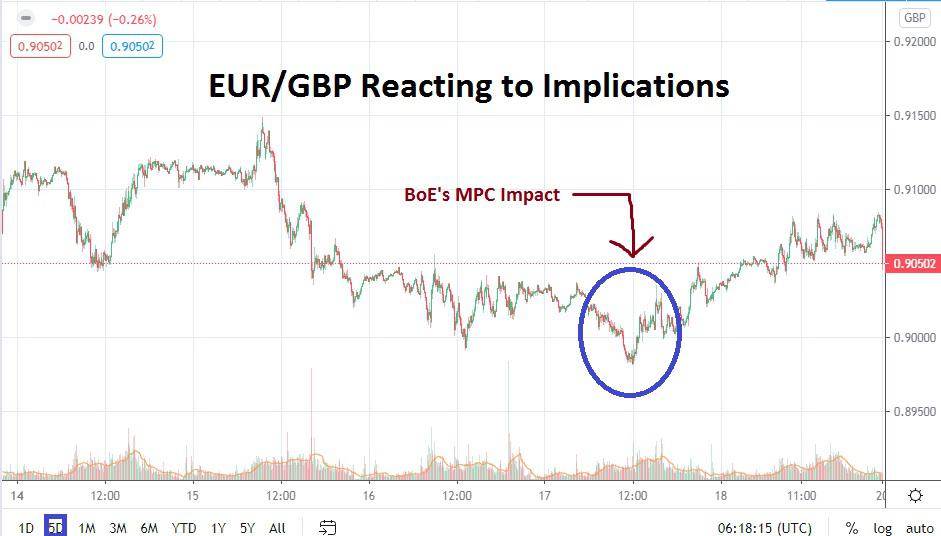 The EUR/GBP has been trading largely between 0.89000 and 0.92000 the past three months. The Monetary Policy Summary from the Bank of England was anticipated and did cause slight momentary volatility for the British pound in Forex, but its gyrations were not extraordinary.

However, the market impact from the Bank of England’s cautious approach due to uncertain economic conditions because of coronavirus and Brexit underscores potential volatility. The EUR/GBP can be expected to fall to values near 0.87000 to 0.89000 if a Brexit deal is agreed upon. However, if no deal is produced and coronavirus continues to shadow the UK landscape, the EUR/GBP could rise to 0.94000 to 0.96000 over the next several months.

The BoE might find its hand is forced further to initiate new measures regarding stimulus, which includes more bond purchasing and potentially other cuts to interest rates to support the UK economy if coronavirus and Brexit developments do not improve. The Bank of England has said before that it has no intention of creating negative interest rates, but current circumstances due to uncertainty remain troubling and could cause the BoE to act in a manner which may be uncomfortable if problems persist.